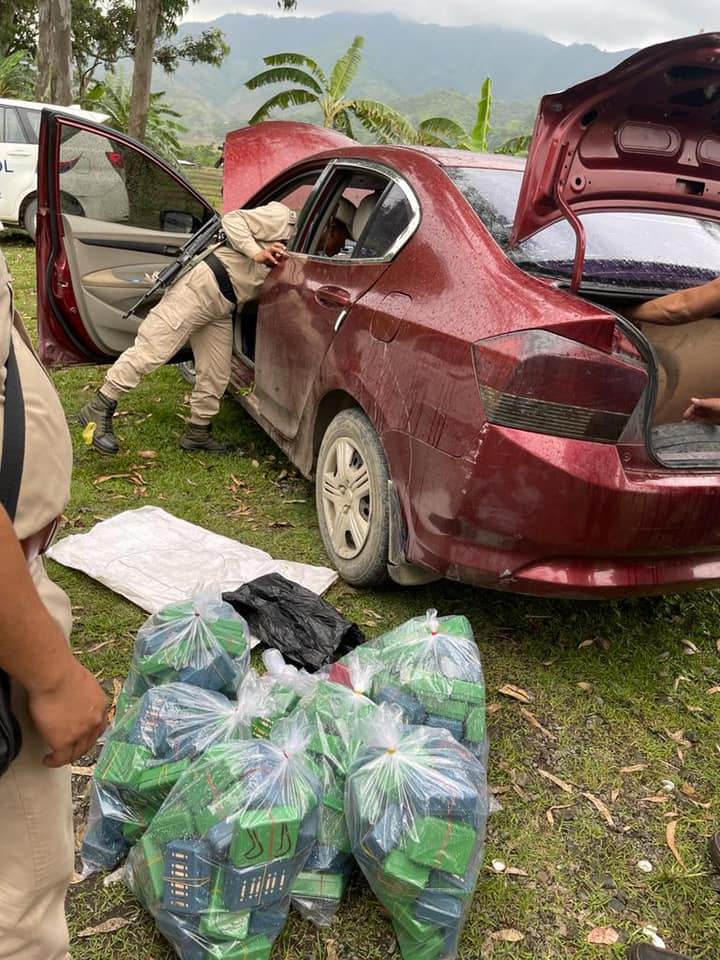 As government of Manipur intense war on drugs continues, the involvement of police personnel in a multi-crore drugs haul has come to light.

A team of Kangpokpi Police Station while conducting random frisking intercepted one Honda City car and found a box containing 212 soap cases.
Kangpokpi SP Amrita Sinha who led a special operation recovered the contraband from a car after frisking of the vehicle while plying through the National Highway-2. The packed soap cases suspected to be Heroin No 4.  weighs around 2 kilograms and estimated to have worth  around Rs 63,60,000 in the local market and Rs 31,80,00,000 in the International market.
Two persons have been arrested and identified as Sonleisei Haokip (23) of Sangaikot and Jamgoulen Haokip (21) of Churachandpur district.
On further investigation, one Lunminthang Haokip (23) of Churachandpur  who is currently serving as the Head Constable of Churachandpur Police Station was also arrested for his involvement in this drug ring and seized an unregistered SUV Mahindra Thar from his possession.

On preliminary investigation, both the persons identified as Solensei Haokip and Jamgoulen Haokip hailing from Churachandpur district, admitted themselves to be drug peddlers.

This indeed is a big development as far as Manipur’s War on Drugs is concerned. Besides, the involvement of a cop in this illegal trade has raised concerns although the crackdown has intensified with every passing day in Manipur.

Earlier, the Poumai Naga tribe of the state declared a ‘drug free zone’ against poppy plantation in the Poumai area of the Senapati district.

Moreover, nearly 70% people of the hills have come out strongly supporting the movement to eradicate drugs and called upon those involved in the illegal drug business, encouraging poppy plantation, drug peddling to young students, etc. in the Valley, to cease operation.