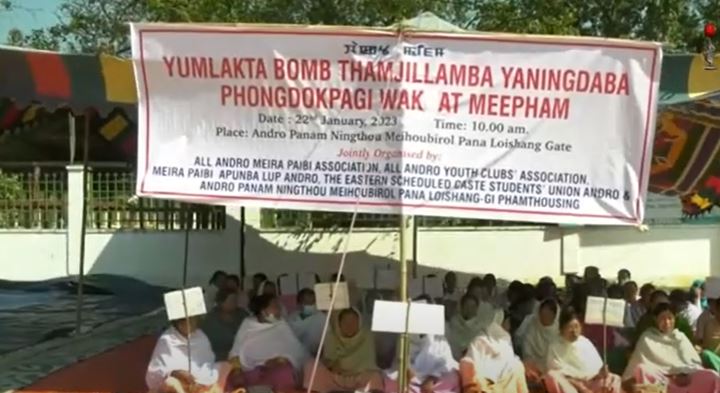 Imphal: On Sunday, women activists of various social outfits staged a protest rally and also sit-in protests against the planting of bombs for the second time at the gate of a widow’s house in Andro in Imphal East district.

Earlier, the protesters holding placards that read, “Don’t plant the bomb at the widow’s house’s gate,” and “We condemn the bomb attacks at the crowded place,” took out a protest rally in and around Andro about 23 km from Imphal.

The protesters are also demanding actions and clarification from those who are responsible for the attacks.

Unknown persons planted the bombs at the gate of Ashebam Tombimacha’s house at Andro Khoimu on January 16. The bomb was disposed of by the Manipur police Bomb Detective and Disposal Squad.

The powerful Meira Paibi Apunba Lup Andro, (All Andro Women’s Vigilant Committee) Secretary General Aseibam Leirangton at the sideline of the protest condemned the acts of planting the bombs and sought clarification as to why the explosives were planted for the second time in less than 2 months.

She said the people of Andro would not remain mute spectators to the attacks on the poor and helpless widow.

All Andro Youths’ Club Association president Panjoujam Opendra appealed to those involved in the attacks not to repeat such fearsome attacks in the future.

Asking what is her fault and why the attacks were made at her house, the president said the attacks in crowded places would be harmful and there is a possibility of hurting the general public if the bomb exploded.

DISCLAIMER: Except for the headline, this story is published from a syndicated feed and has not been edited by CitizenePress.