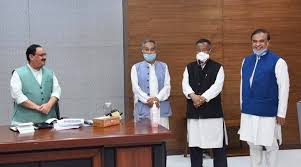 Imphal: NPP MLAs met yesterday evening to choke its strategy after reports of reshuffle in council minsters leds by N Biren Singh. After report of removal of two its cabinet ministers NPP has resolved to pull out its support from  BJP-led coalition  if event of any changes to the status quo of its ministers/MLAs.

The NPP Ministers’ decision to walk out of the BJP-led coalition in case any one of them is removed from the Council of Ministers is closely related with the understanding they reached with BJP Central leaders before they agreed to renew their support to the coalition Government, sources informed.

It was widely speculated that Letpao and Jayanta may be dropped.