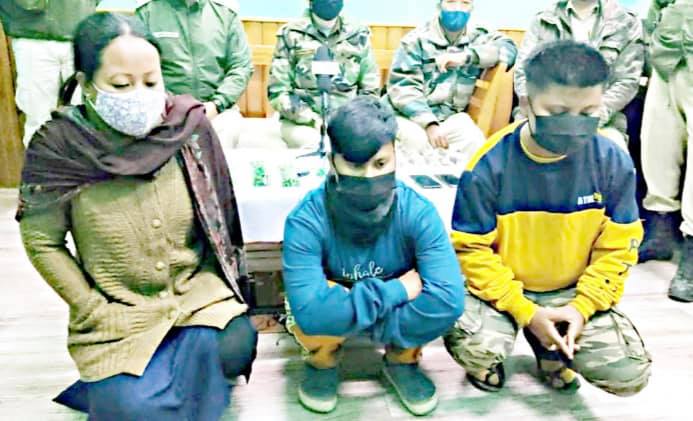 On getting reliable input at about 11.30am Friday that some cadres of National Revolutionary Front of Manipur (NRFM) are to plant explosives at Moirang area, Bishnupur police commandos conducted a massive search operation in and around Moirang area.

During the course of operation, the commando personnel first arrested two women, Laishram Jillarani and Laitonjam Elizabeth and recovered 9 live rounds of 0.32 mm from their possession.

On questioning them, they revealed that on the instruction of one Chinglensana Thangjam of NRFM, they went to plant explosives at Moirang market.

However, noticing the presence of CDO teams, they hid the explosives at the residence of Hemam Romita at Khoirou Leikai near Moirang Lamkhai, another member of the NRFM, said sources.

The commando personnel conducted search at the house of Hemam Romita and recovered the explosives. Romita was later arrested from DC Mini Secretariat Complex, Bishnupur.

The three women revealed that they were involved in collection of funds for the NRFM from shops and general public of Moirang area by serving demand letters.

They further disclosed that they were also involved in planting an IED at Naya Naya Hotel, Moirang on June 25 this year.

The arrested persons and the seized items have been handed over to Moirang PS for further necessary legal action, said sources.

The search operation was conducted under the command of Additional SP (Ops) Okram Wangkhomba and led by Deputy SP (CDO) S Gourachandra with the assistance of OC/CDO Sub Y Shakti Shen, said the sources.