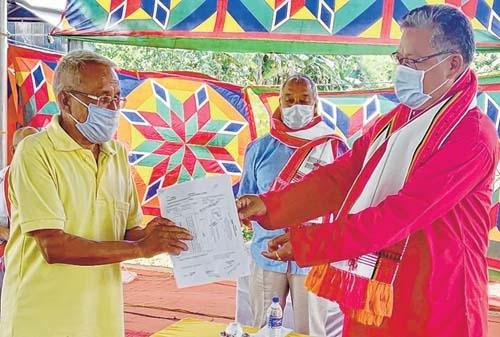 Imphal, September 20 2020:  Manipur Revenue Minister Shri Karam Shyam expressed unhappiness with the continued objections and opposition to the land surveys in the hill districts of Manipur. He said that it is rather unfortunate that any exercise to survey land in hill districts is opposed.

He said that subsequent upon the Central Government’s instruction to digitize all land records, land survey is going on in Nagaland and Mizoram, Shyam said. Land survey does not necessarily mean the surveyed land would be taken over by the Government. It is basically about determination of the area of land owned by each individual and recording of the land owners’ names and other details.

All land owners would enjoy full rights over their land irrespective of whether the area has been surveyed or not, he said. The objection raised against land survey by hill people is driven by a misplaced notion.

There should not be any objection against surveying lands, said the Revenue Minister. “As long as I am in charge of Revenue Department, there would not be any unlawful allotment of land. Any attempt to acquire or register any piece of land fraudulently in the name of any individual would not be tolerated,” he asserted.

Yet, lands would be allotted if there is valid ground as testified by the distribution of land pattas to the people of Langthabal Khoupum, he added.

There are many people who have settled in a particular place for over 30/40 years but they are still denied the land ownership right because they are not in possession of Jamabandi (patta) .

Such denial of land ownership right reduces land tax accrued to the State exchequer, he said.

There are many places in all the 60 Assembly Constituencies of the State where some people have been occupying khas land without paying tax or premium, Shyam continued.

Elected representatives concerned may work with officials to allot Jamabandis to people occupying such khas land if it is reasonable enough but Jamabandis cannot be issued without valid reasons, he said.

Land is a natural gift but it is limited. Contest for land often leads to conflicts, violence and even wars, said the Revenue Minister.

Once Jamabandi has been issued, the recipient is entitled to full land ownership right, he said. He then appealed to the people of both Khoupum Chingthak and Khoupum Chingkha to seek Jamabandi for the lands they occupy/own.