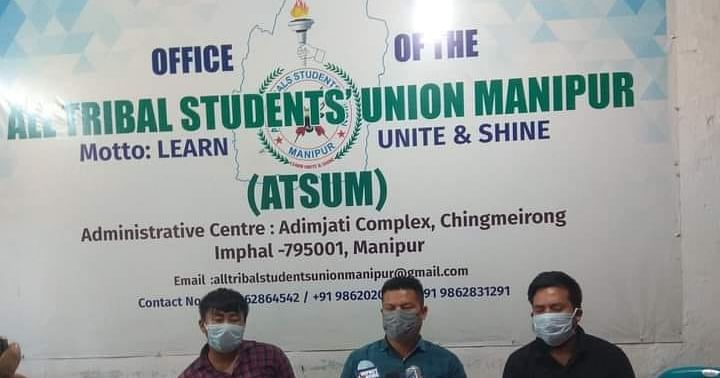 Tangkhul Students’ Union and Kuki Students’ Organisation (Moreh Block) has expressed its support to the ATSUM’s 24 hours bandh on March 12 . In a statement, KSO Moreh Block said it supports the All Tribal Students’ Union Manipur (ATSUM) and its demand to hold elections to the Autonomous District Councils (ADCs) at the earliest.

Earlier, ATSUM had signed an agreement with the State Government to hold the elections timely, KSO said, adding that the Government, however, is yet to notify the election schedule.

Thus, perturbed with the deliberate act of delaying the elections, a general assembly of the ATSUM on March 5 had decided to call a 24 hour total bandh from midnight of March 12 in the entire hill areas of the State which will be followed by indefinite economic blockade if the Government fails to notify the election schedule by March 11 .

The total bandh and indefinite economic blockade include halting of ongoing National and State projects in the hills.

The Zeliangrong Students’ Union, Manipur, has also pledged support to the proposed bandh called by ATSUM and appealed to the public especially the tribal people to support and extend co-operation to the bandh called by the student body.

KSO Moreh Block backs ATSUM’s decision and it will extend support in all future agitation of the union, it added.

Stating it is enforcing the bandh in Churachandpur district, the body said only media, medical and emergency services will be exempted from the purview of the proposed-bandh.

The elections to the six ADCs–Churachandpur, Sadar Hills, Senapati, Chandel, Tamenglong and Ukhrul should be held at the earliest, it said strongly condemned the Government for deliberately delaying the elections.

It may be noted that the office of the ADCs have been lying vacant since December 2020 after it was dissolved by the State Cabinet making the Deputy Commissioners of the districts caretaker Chairmen.

Earlier, the tenure of the office of the ADC Members was extended by six months in June last and it had expired on November 30 .

On the other hand, amid the demand to hold the elections to the six existing ADCs, the Demand Committee on Creation of Autonomous District Councils has been urging the State Government to create ADCs for the newly created districts of Pherzawl, Kamjong, Noney and Tengnoupal before holding the elections.

Making its stand clear the Committee urged ATSUM to instead support them and ensure that the ADCs for the four newly created districts instead of imposing the proposed bandh and blockade to demand elections to the six ADCs.

The committee had asserted that the ADCs must be created at the earliest and its elections should be held simultaneously with that of the other ADCs.

It had cautioned the Government that the committee along with people of the districts would launch stringent agitation if the ADCs are not created before holding the elections.

The Naga Students’ Union, Chandel (NSUC) has also endorsed the 24 hours bandh called by the ATSUM in all the hill districts of the State from March 12, which will be followed by an indefinite economic blockade.

The total bandh and proposed economic blockade will include putting a stop on all ongoing National projects and State project constructions in the hills, said NSUC in a statement.