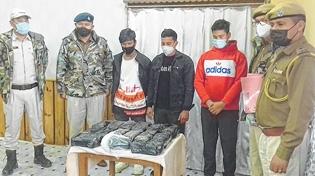 Imphal, February 22 2021: A team of Imphal West police commandos seized 1,40,000 World Is Yours (psychotropic substance) also known as Amphetamine  tablets from two trucks while conducting a frisking operation at Kanglatongbi Shantipur, yesterday. The seized drugs is estimated to be worth about Rs 14 crore.

All the three are residents of Keibung Makha Leikai, Thoubal, he informed.

According to the arrested individuals, the WY tablets were given to them by one unknown person sent by Md Itomba of Keibung Makha Leikai, currently staying at Guwahati and to be transported till Guwahati.

The SP continued that arrested persons along with the seized items have been handed over to Sekmai police station for further necessary action.

The SP also stated that following the arrest the state police now is tracking the interstate drug racket that has been going on and many evidences in the connection have been found.

He however refused to reveal the development as it would sabotage the investigation that has been going on.

” We are processing for a joint operation with neighbouring states to nab those drug smugglers”, Meghachandra said.