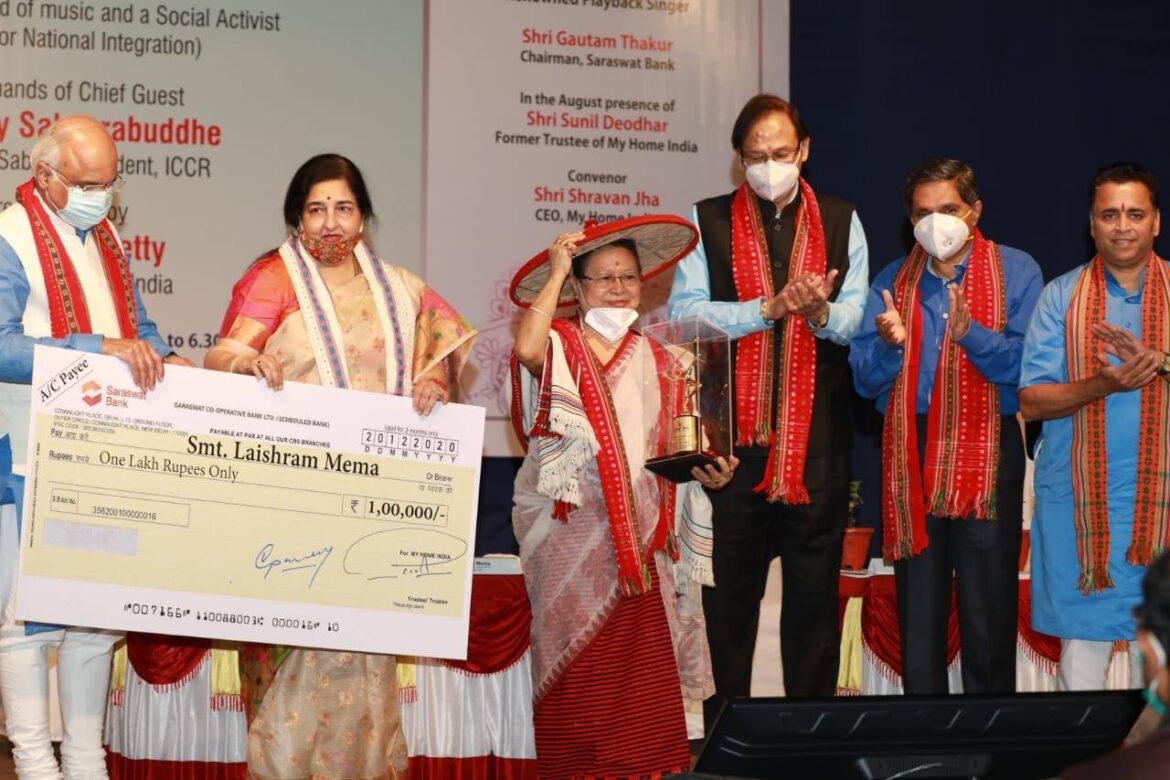 Imphal, December 22 2020: Renown Manipuri singer Laishram Mema, was honoured with the “One India Award” by an non-governmental organization (NGO) called “My Home India” in an event held at Veer Savarkar Memorial Hall, Dadar in Central Mumbai on December 20 .

Although Laishram Mema loves classical music, she has sung various types of songs including Ghazal and “Sugam Sangeet” in Marathi, Hindi, Bengali and Assamese.

She is also involved in social work and as such her selection for the award was most deserving, said Sahastrabuddhe.

“My Home India” is a NGO which works to unite the people of the North East with the rest of India to achieve National unity.

This year, the organization provided food and other essentials every month to over 5,000 people from North East India during the pandemic, Deodhar said.

“My Home India” seeks to bring in an emotional integration between people of rest of the country India with the people of North East India, the region which has been facing problems such as Chinese invasion (on Arunachal Border), infiltration of Bangladeshis, insurgency & terrorism, he said.

Besides these issues, there is a major issue of socio-economical and emotional alienation faced by people of North East in general, he continued.

The NGO, which is now 6 years old, is planning to expand its activities and base in future.

So far the NGO has helped over 500 students in Maharashtra & Karnataka.

Besides it has provided help lines in relation to medical, legal & travel related aid to more than 700 individuals. It has also given career guidance to students.

“My Home India ” ensures participation of the students from North East in local festivals such as Holi, Gudi Padwa, Ganapati, Navratri, Dusseara, Diwali, Makar Sankranti etc. It is also creating awareness about the festivals of the North East, among the local population.

“We have been conducting lectures and group discussions on North East India at educational institutions, citizen groups, and similar forums across India.

We have also been trying to create awareness through cultural events, sports competitions, etc.

We also organise ‘Feel the North East’ tours for selected persons from the rest of the country,” Deodhar said.