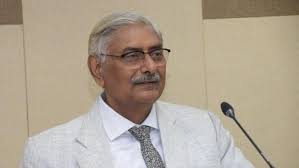 Dimapur, May 12: The government of India’s interlocutor for Naga peace talks, AK Mishra and leaders of NSCN (IM) met in Delhi on Thursday to hammer out the differences and bring a settlement to the vexed Naga political issue.

A reliable source told this newspaper that NSCN (IM)’s 10-member delegation was led by member of Collective Leadership, General (Retd.) VS Atem.

It was informed that there was no breakthrough at the meeting and another round of talk is scheduled on Friday (May 13) at 11 am.

The source refused to divulge any details about the outcome of Thursday’s meeting.

It may be mentioned that Mishra held hectic parleys with various Naga political groups and leaders of civil society organisations in Nagaland last month in an attempt to bring a solution to the protracted Naga political issue.

During his week-long stay in the state, the interlocutor had an informal one-on-one meeting with NSCN (IM) General Secretary and chief negotiator, Th Muivah at Hebron Camp before holding a few more rounds of talk at Chümoukedima Police Complex in Dimapur before returning to Delhi.