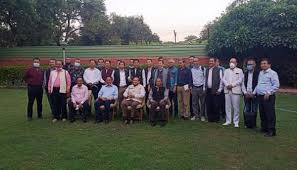 Dimapur, Nov. 5 : The Working Committee of Naga National Political Groups (WC-NNPG) has ‘positively responded’ to the appeal made by the Political Affairs Mission (PAM) of the Naga People’s Front (NPF) and agreed to meet NSCN-IM leaders without any pre-conditions to take the Naga Peace Talks to a logical conclusion.

The decision of the WC-NNPG to meet the NSCN-IM leaders arrived at a consultation meeting of the NNPG and PAM led by their respective convenors N Kitovi Zhimomi and TR Zeliang held on November 4 in Dimapur, an update from WC-NNPG media cell stated on Thursday.

It stated that the interaction stressed on the urgent need for the Naga negotiating groups to come to a common understanding to facilitate an early solution to the decades Indo-Naga political conflict. It added that minor misunderstanding between the NNPG and PAM that arose due to mis-interpretation of certain words was amended amicably.

Meanwhile, the WC-NNPG acknowledged the genuine efforts of TR Zeliang-led PAM to build bridge between the Naga political groups negotiating with the government of India.