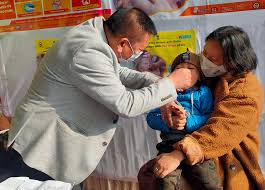 Kohima, Feb. 5 : Nagaland registered 100% coverage in the Intensified Pulse Polio Immunization (IPPI) drive which was held across the state, as a total of 1,53,741 children were immunized during the exercise.

According to an update from State Immunisation Officer, Dr. Ritu Thurr, “the IPPI which started on 31st January has completed successfully in all the districts with 100% coverage of all the estimated children between 0-5 years”.

‘The booth day on January 31 was followed by intensified house-to-house immunisation of left out children,’ the update read, adding that pulse polio rounds are critical to eradicate poliomyelitis and to avoid resurgence.