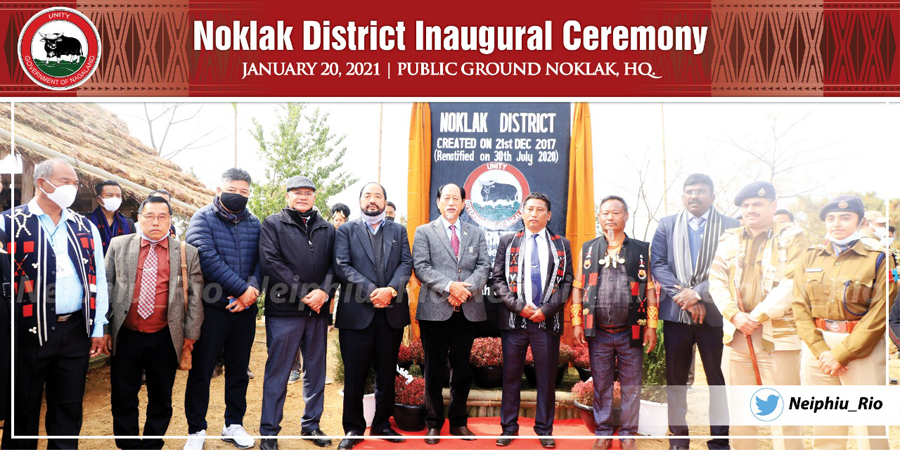 The inauguration came more than three years after Noklak was declared a separate district on December 21, 2017 and few months after the first deputy commissioner and superintendent of police took charged of the district on August 6, 2020.

The district shares its boundary with Myanmar in the East, Tuensang in the West, Kiphire in the South and Mon in the North.

Noklak was originally a sub-division under Tuensang district before it was made a district.

Speaking at the inaugural programme held at public ground in Noklak, Rio called upon the people of the district to set a “good example” for the rest of Nagaland, as the youngest and new district.

He congratulated the citizens of Noklak and urged them to co-operate with the government for all round-development. He called upon the people to develop a “competitive spirit” along with other districts of Nagaland.

The chief minister also stressed on Noklak as a “frontier district” because of its international boundary with Myanmar.

The village guards (VGs) have to guard the youngest district, as is the case with other frontier districts. So far, about 10,000 VGs have been engaged in guarding the frontier area in whole of Nagaland, Rio maintained.

Being a full-fledged district, it is mandatory to build two-lane road that connects to the district headquarters. In this regard, the CM assured them of state government’s support and appealed to the people to assist all developmental activities taken up by the state government in the days to come. He added that the district would become a trade centre.

Stating that the protracted Naga political issue is inching towards achieving the final settlement, he called upon the people to work for the betterment of the Naga society.

While stating that the formal inaugural programme of the new district has been delayed, he said there are formalities attached to demanding for a separate district, state, village etc. as certain criteria needs to be fulfilled and convince the authority concerned.

The chief minister conveyed best wishes to the people of Noklak and expressed hope that the district ‘scales new heights of progress each day’.

Speaking at the inaugural function, Deputy Chief Minister Y Patton said that the event was a fulfilment of long-felt dreams of the people living in the far-flung area. Upgrading the sub-division to a full-fledged district will address the growing demands of the people and bring the administration to their door-steps for all round development, he added.

Patton appealed the people of Noklak district to be law-abiding citizens and extend continuous support to the district administration as the district ‘still requires development on many fronts’. He urged the people to co-operate and work for the uplift, development and progress of the new district.

The deputy CM also appealed to the officials to put more efforts and contribute towards development of the district.

The inauguration of the district, he said, was a manifestation of the concerns that the People’s Democratic Alliance (PDA) government has for the people. He urged the citizens to support the initiatives of the PDA government and actively participate in the activities of the state government.

Pointing out that ‘newly-created district or state is bound to have some boundary issues’, he appealed to the people of the district to be “more magnanimous” in their approach towards settling such issues with neighbours. “Because any persistent land dispute and boundary issues will inevitably hamper developmental activities and growth of the district,” he said.

The new district was inaugurated coinciding with Khaozaosie-Hok-Ah, a festival of Khiamniungan community.

Some facts about Noklak district