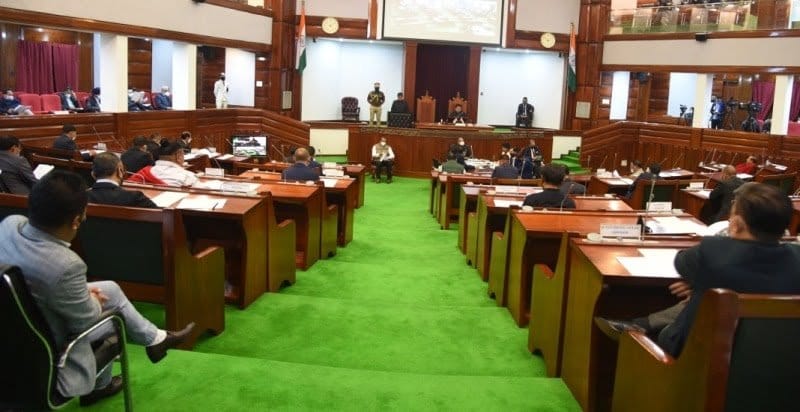 Kohima, Feb. 12: The 7th session of the 13th Nagaland Legislative Assembly (NLA) begun on Friday with the traditional address to the House by Governor RN Ravi at the Assembly Secretariat.

Nagaland governor R.N. Ravi on Friday said with the Naga political issue remaining in focus, there is a need for efforts to build on the substantial gains made on it so far and to move swiftly for the final solution.Addressing the first day of the seventh session of the 13th Nagaland Assembly,

Ravi said the general law and order situation in the State has remained largely peaceful though there have been some localised incidents.These incidents were contained with swiftness by the district administration and police, he said.

To enhance fighting crime against women, a woman police station at Kiphire was established, thus covering 11 districts, Ravi said. He said a Cyber Crime Prevention against Women and Children Lab-cum-Training Centre has been made operational and cyber cells to investigate cyber crimes have been also set up in all the districts. The Nagaland Police has set up anti-extortion cells in all the districts of the State, which work in close coordination with other law enforcement and security agencies to contain illegal activities, he added.

Ravi expressed his satisfaction with the State Government for successfully combating the COVID-19 pandemic.“But now there are three BSL labs and the State has acquired 32 True Nat machines,” said the governor.He expressed his appreciation to various State and Central agencies and civil society organisations in containing the recent outbreak of forest fires in the beautiful Dzukou valley in Kohima district. He said that the Government is making long-term plans to prevent such incidents in the future and also further strengthen the response mechanism.The Governor also gave an overview of the developmental activities being carried out by all departments in the State.

Chief Minister Neiphiu Rio, who also holds the Finance portfolio, will present the budget for the year 2021-2022.

The Assembly session will end on February 20.