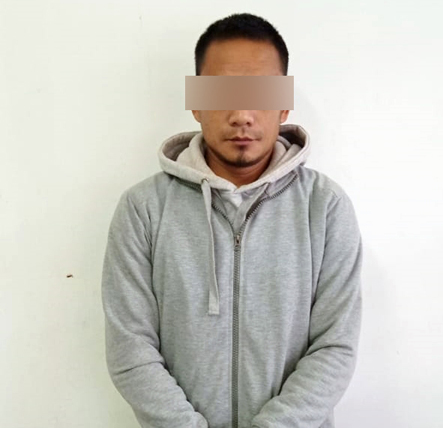 Mokokchung, Dec. 10,2020: One person, known as the ‘masked thief’ in Nagaland’s Mokokchung town, was finally arrested by Mokokchung police on December 9.

The accused, identified as Imnawapang, had earned the infamous sobriquet after he started stealing goods from various shops wearing a face mask.

Police sources said that they have been hunting for the thief since November, following reports that a person wearing face mask has been fleeing with goods after pretending to buy them.

His modus operandi was collect items from shops, load them onto his vehicle, and drive off with the goods without paying the shopkeepers by making the excuse of going to the ATM to withdraw money.

After receiving complaints from the traders, police printed out his photos from CCTV footage and shared it with ‘secret informants’.

On December 9, cops from police station-I, with help from Mokokchung Chamber of Commerce and Industry (MCCI) and public, apprehended the thief in his seventh attempt to steal from a shop near MMC shopping complex at Dilong ward, at around 5.30 pm.

Sources said that he has admitted to stealing from the shops; some of the stolen goods were recovered from his residence at Mokokchung compound. It was informed that he had stolen goods worth INR 1,50,000 from various shops.

A case has been registered in this connection and the accused has been forwarded to court. Further investigation is on, said the source.

Meanwhile, MCCI has conveyed its appreciation to the district administration and police for keeping utmost vigil in Mokokchung town. It further appreciated the district police personnel for their prompt action in arresting the “dreaded masked habitual thief”.

The MCCI stated that his criminal deeds have been a cause of great concern for the business community of Mokokchung and that several traders have been victimised by the culprit since last month, rendering huge financial losses to the victims and causing much insecurity, mental trauma and distress.

Further, MMCI said that the arrested thief being a habitual offender, there is no guarantee that he will not commit the crime again if he is let off without serving his term, wherein the traders in particular and the public in general will fall prey to his criminal acts again.

In this connection, MCCI has made this demand to the authorities: the culprit should not be granted bail under any circumstances and that he should be prosecuted and punished to the fullest extent of the law; and the ‘innocent victims’ of his crimes are compensated immediately.

“Taking advantage of the conditions offered by the festive season and the pandemic SOPs, the culprit employed an unassumingly subtle yet highly proficient modus operandi to prey on his victims. He would appear at his targeted store with a visible shopping list, always well-presented, and place his orders like any regular festive shopper would. He always had his face-mask and hoodies on while maintaining sufficient physical distance from people around him and politely interacted with the salesmen in the most courteous manner, effectively deceiving them without revealing his identity but at the same time winning their confidence.

“He would then ask the cashier to prepare the bill to make his payment while convincing the unsuspecting salesmen to load his supplies to his vehicle, which was often a hired taxi parked strategically at a safe distance. Then, on the pretext of drawing cash from a nearby ATM, he would leave the shop and calmly drive away without making any scene, all along keeping his taxi driver unawares. He also employed craftily improvised variants of his modus operandi and got away,” it stated.