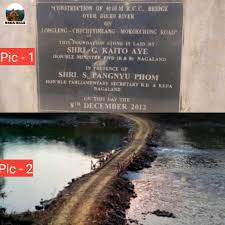 Kohima, Sep. 26 : Villagers along the Longleng-Chuchuyimlang-Mokokchung road has initiated a cword funding campaign for the constructing 40 metre long RCC bridge over Dikhu river.

On December 8, 2012, the then PWD (R&B) minister, G Kaito Aye had, ‘laid the foundation stone’, in the presence of the then parliamentary secretary for RD and REPA, S Pangnyu Phom. Both the legislators are cabinet ministers in the present government. The residents of two villages in the area— Pongching and Mongtikong—have been making do with the temporary wooden bridge they could build in order to travel across the river.  The locals have formed a committee to oversee the construction of a wooden bridge through crowd-funding.

Villages said that they are determined to start the construction of the bridge, through donations, from November this year.  All these years, the state government has ignored the project although the route is important for the people, which connects not only the villages of Longleng district with Mokokchung but also parts of Mon and Tuensang.