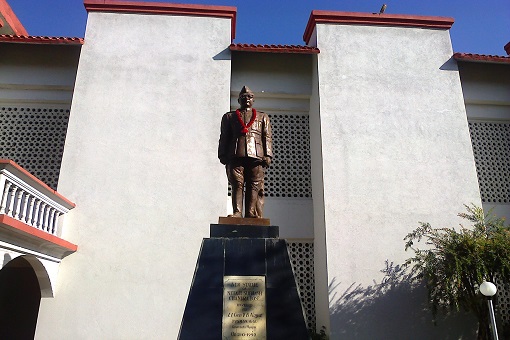 Netaji Subhas Chandra Bose’s legacy is remembered by every Indian worldwide. He played an integral part in the country’s freedom struggle with his involvement in the Indian National Army (INA), also known as the ‘Azad Hind Fauj.’ Indian nationalists formed the army to fight British rule during World War II.

Moirang, 48 km from capital city Imphal in the Bishnupur district, has a special place in the history of India’s freedom struggle only due to Subhas Chandra Bose as the flag of the Indian National Army (INA) was unfurled there on April 14, 1944.

Moirang was a part of the British empire until the Azad Hind Fauj recaptured a town and a part of Nagaland from their clutches on April 14, 1944. Many, including Britishers, believed that it was one of the most challenging and brutal fights. The courageous Indian National Army outnumbered them that Subhas Chandra Bose led.

Three years before India’s Independence, Netaji Subhas Chandra Bose, the nationalist iconic leader of the freedom movement against British rule, not only set foot in North-East India but also boosted the struggle against the British Raj.

As the local people were celebrating Cheiraoba (Manipuri New Year), a column of the INA’s Bahadur Group (Intelligence wing) led by Col Saukat Ali Malik reached Tronglaobi, a village about 5 km from Moirang. A few local leaders went to meet them and ushered them in to Moirang, where Col Malik hoisted the Tricolour on April 14, 1944, with a springing tiger on it, at the historic Moirang Kangla (an ancient spot for the ceremonial coronation of the kings).

Subhas Chandra Bose and Colonel Shaukat Malik hoisted the tricolour for the first time on Indian soil. The historic occasion was attended by several members of the INA, including a man named Mairembam Koireng Singh, who went on to become Manipur’s first Chief Minister. Three years later, India attained independence from colonial rule.

Thus, Moirang became the second place on Indian soil where the Azad Hind flag was hoisted, the first being in Port Blair in the Andamans where Netaji hoisted it on December 30, 1943.

The INA Museum in Moirang, inaugurated on September 23, 1969, has a collection of priceless letters, invaluable photographs, badges of ranks and other war memorabilia that remind the visitors of the sacrifices made by the INA soldiers under the charismatic leadership of Subhas Chandra Bose.

Union Home Minister Amit Shah had on January 6 hoisted the Tricolour at the INA headquarters at Moirang on a 165-feet-high pole.

Not only in Manipur’s Moirang, villagers of different Nagaland villages, especially at Ruzazho and Chesezu villages, both in the Phek district, kept the legacy of Subhas Chandra Bose alive.

According to Dr Samudra Gupta Kashyap, a veteran Guwahati-based author and journalist, Ruzazho is a small village, which a section of local people claim was liberated from the British by the Azad Hind Fauj or INA in April, 1944.

The Azad Hind government is said to have ‘administered’ it for a few months thereafter, with local historians claiming that Netaji had himself visited the Naga Hills, had spent a few days at Ruzazho, and had also appointed a local youth Vesuyi Swuro as a dobashi (interpreter).

The INA had apparently also set up a small operational base at Ruzazho for some time in 1944 till the defeat of Japanese forces in the Battle of Kohima.

A house, said to be where Netaji had stayed, is preserved as also some artefacts of the Azad Hind Fauj,

While the 1,15,000-strong Fifteenth Army of Japan was directed towards India, three Japanese divisions and one division of the INA were the first to make a combined march from Myanmar to Manipur.

The objectives of the Japanese and the INA were different. While the Japanese invasion was intended as a ‘pre-emptive strike’ to prevent British attempts to take back Burma, Netaji’s idea was that once Imphal and Kohima were captured, the INA would march into Assam and Bengal, where they would receive a hero’s welcome, and the Indian national movement to oust the British would receive a massive boost, the author said in his book.

The INA soldiers marching alongside the Japanese troops chanted the mantra “Chalo Dilli” and sang “Kadam kadam barhaye jaa” while crossing the India-Burma border to step onto Indian soil. The goal was to see the Indian flag flutter atop the Red Fort in Delhi by driving out the British, Kashyap said in the book.

Each of the three Japanese divisions had a regiment of the INA with it. Netaji’s concept was that once the INA marched onto Indian soil, it would further intensify the freedom movement. Prior to that, Manipur had already had the first experiences of the Second World War when two powerful Japanese bombs were dropped on Imphal on May 10 and 16, 1942, leading to a number of civilian casualties.

Prisoners escaped from the jail, banks, treasuries and markets were looted, educational institutions shut down, and prices of essential commodities skyrocketed. Most people left the capital and Imphal became a ghost town.

The combined Japanese-INA forces stepped into Indian territory on March 18, 1944 through the southern hills, and the World War finally reached Manipur.

Kashyap said that 32 Manipuris, who were working in Myanmar, not only joined the INA under the leadership of L Guno Singh, but were also part of the advance party to enter Manipur.

Of them, M Ahanjao Singh, B Balhop Sharma, M Chaoba Singh and S Yaima Singh were arrested in Churachandpur, and shifted to Kolkata, from where they were released only after the war ended.

Many Kuki youths on the other hand were enrolled as informers, porters, civil suppliers and soldiers, the author said.

In Tripura, to pay rich tribute to Netaji, a mammoth, colourful procession on the occasion of the iconic freedom fighter’s birth anniversary on January 23 has been held for the past 74 years, the largest of its kind in India.

The procession, organized every year by Netaji Subhas Vidyaniketan, portrays themes like Netaji’s contribution and role in India’s freedom struggle, the dream of freedom fighters of a united India, the country’s cultural diversity and unity, harmony among Hindus and Muslims, conservation of water, prevention of child marriage, empowerment of the girl child and awareness about differently-abled children and others.