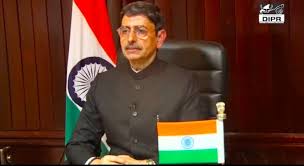 Kohima, Jan. 30 : The National Socialist Council of Nagalim (Isak-Muivah) , NSCN-IM has accused Nagaland Governor and Interlocutor RN Ravi of ‘twisting’ the reason for stalled Indo-Naga political talks as ‘politics by gun’ in his Republic Day speech.

“When the pending issues are all about the Naga people’s political rights and identity as symbolised by the Naga National Flag and Yehzabo (Constitution), he (Ravi) put the blame on gun politics of NSCN. The lies he takes pleasure to indulge”, said an article in Nagalim Voice, a bi-annual magazine of the NSCN (IM).

In his speech, Ravi blamed the delay in Naga solution to “politics by gun”.

“The latest initiative since the last 24 years could not fructify as yet due to unrealistic intransigence of some people who are unwilling to forsake the politics by gun,” he claimed.

Also Read Some people are unwilling to forsake the politics by gun: Governor RN Ravi on Indo-Naga Peace Talks

The NSCN (IM) further accused Ravi of “high misdemeanour” and added that his speech “is nothing better than habitual lying tongue. The Naga political history and its movement have been there before Ravi was born. His learning of the Naga history was deceptive in nature and destructive in totality,” the magazine’s editorial note read.

“All said and done, Ravi’s speech was vicious in background, venomous in content and vitriolic in delivery,” it alleged.

The NSCN (IM) said that Ravi is “a liability for the Naga political settlement” and that “Naga people need a trustworthy and temperate person as India’s representative to the Indo-Naga political talks and not a malicious and conceited person of the type of RN Ravi”.

“When Ravi was appointed as India’s interlocutor to the complex Indo-Naga political talk there was a lot of scepticism that he could deliver justice to the Naga political issue given his dubious background as IB’s Special Director,” it added.

“The Naga people’s expectation that Ravi will help find a solution to ameliorate the Indo-Naga political crisis was lifted to a new height when the historic Framework Agreement was signed on the August 3, 2015. But after generating much hype he proved himself as real turncoat and started hobnobbing with other groups he had fostered sinisterly. The situation reached a flash point when he committed fragrant breach of trust by violating the spirit of the Framework Agreement,” it said.

The NSCN (IM) also lashed out at Ravi for his 58th Statehood Day speech for “glorifying” the Naga People’s Convention’s 16-Point Agreement.

“To glorify the 16-Point Agreement that the Naga people had rejected and condemned is something that cannot be condone with. For such idiotic and nonsensical statement the Naga people let loose a blistering attack against Ravi. He was also found having camaraderie among the Naga pseudo-national groups which only speaks volumes of his political infidelity,” it alleged.