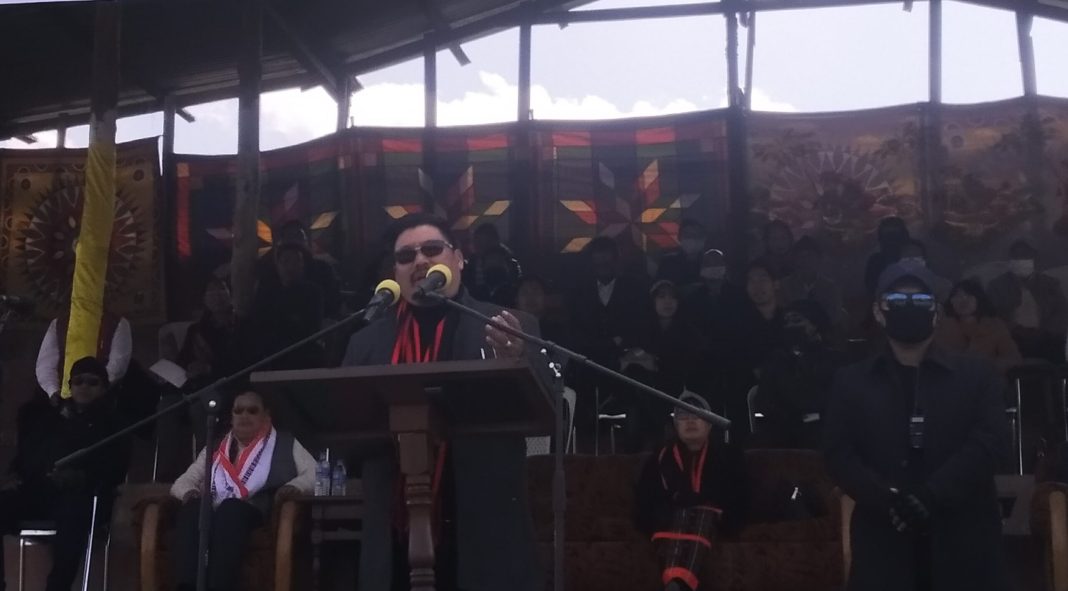 Over 7,000 people from different walks of life attended the programme.

Unravelling the progress of the ongoing Naga peace talks before the massive gathering here at Tangkhul Naga Long ground Ukhrul on Thursday, Anthony Ningkhan Shimray, Longvibu, Naga Army, said the long protracted Indo-Naga political talks is nearing completion as most of the competencies have been sorted out and appealed Nagas across the globe to stand united.

“You know what NSCN is. But, most people do not know how God is using NSCN. Nagalim does not come from anyone but it is a gift from God. It is not given by India because in the creation of heaven and earth, every nation was allotted its share. God gave us our share.”

“Naga’s freedom movement is rooted in the kingdom of Christ. He cited the story of Sadhu Sunder Singh of Punjab who asked God to make Punjab the kingdom of God but he was told that God had already another land as his people, as his kingdom. I have given the title to Naga people. In this context, our leaders have been seeking God’s way in making our land His kingdom. Many of you are aware of the political aspect but not this part.”

“We complain a lot but we do not seek God’s way. If I have to say it, the talk between India and Naga is complete but what remains is the promised land. The issue is no longer between India and Nagas but between God and the Nagas. It is between NSCN and God. Why it took so many years. When we are almost there, why are we facing stumbling blocks? Why can’t we move forward or backward? Because Naga people are yet to reach God’s purpose. God’s plan and Naga people’s plan are in conflict. In every kingdom, there is law, a process. We cannot build God’s kingdom with our laws, our customs or ways. We have to submit to laws, nature and order of the kingdom of God. Today, God is refining us.”

“Though I am the Army Chief, I don’t sleep holding AK 47. I sleep with the Bible. The same is with the rest of the leaders. Our source of strength comes from God.”

“If God be for us, there is nothing to be afraid of. We can defeat our enemy. If God is for you, there is nothing to worry. God is with us yesterday and today but the problem is that we are not sincere in our faith. Our solution is in the hands of God. Why is there delay? Because, instead of seeking God’s plan, we want to do things our way.”

Views On NSCN and NNPG

When asked about the prospects of NSCN and NNPGs joining hands together, he responded without the slightest hint of hesitation that everyone will be taken onboard. And added that a group whose solution is rooted in Hindu traditions, culture and beliefs cannot be party to NSCN whose unique solution is for Nagas cutting across geographical barriers.

“I don’t mean to snub NNPGs,” he was quoted as saying.

Taking a dig at NNPG, he stated that “NNPG is seeking to make Hindustan kingdom. Manipur and Nagaland are colonies of India and not states… The NNPG army will be demobilized, dissolved and merged with India security forces. Whereas NSCN army is to reform into modern army of Naga nation. To build a modern state, we are in peace talk with India, it is not to build a Hindustan state. When we reflect on our resources, we already have enough to build a state, a sovereign nation.”

“Today, through God’s grace we are here. Our chief negotiator, Th Muivah is negotiating based on God’s plan. There is disunity among us and God wants us to reconcile. FNR is working very hard, it is very easy to say you should reconcile. But it is more complicated than that. Unless, one admits his mistake it is not easy. How can we reconcile with someone who refuses to acknowledge his mistakes or errors.”

“Solution will arrive soon but according to whose wishes will it be? Will it be NNPG’s? Or India? Or NSCN? While some Nagas are marching to the promised land, there are some groups who want to go back to Egypt. The NSCN army has rededicated to God and has made a covenant with God that we will not betray our people. God will judge us if we betray our people.”

“The message is clear. It will not be because of Naga strength or ability but by God’s way, desire and power. God alone can give freedom and victory to the Nagas. Without Nagas political freedom, emancipation, we can have no Nagalim. Jayaprakash Narayan said, “it is far better for India to keep a friendly people at the frontier rather than unfriendly people in times of foreign aggression.”

“For India, it is better to have a friendly partner with those in the frontier. Without a political solution between India and NSCN, there is a threat to defense, security and economy of India. India wishes to become a superpower. But without solution, it will be in vain,” he said

“My appeal to the Naga brethren is let us unite. It is time for understanding and not confusion. I want to express my gratitude to the Naga people, when India gave an ultimatum in October, 2019, you stood up and rallied for the Naga flag and constitution, and did not submit to a solution without our flag and constitution. Much of our competencies have been discussed. The plan of God for the deliverance and liberation of the Naga people have begun and it is about to finish. Let us unite in our spiritual as well as political vision. The power of the people movement is here and this is why I am coming back to you today.”

Anthony Ningkhan Shimray who was imprisoned for more than 5 years in Tihar jail.

Anthony Ningkhan Shimray, once NIA’s most wanted “arms purchaser”. NIA in its chargesheet states that Shimray was arrested in front of the Patna railway station on September 27, 2010 when he had “clandestinely” entered India from Kathmandu after arriving from Bangkok on a Bangladeshi passport after an arms deal. Shimray was released from Tihar jail in 2016 on bail.