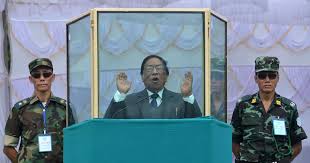 Dimapur, Nov. 16,2020: In the aftermath of debate over leaders of Naga political groups getting Z Plus category security from the government of India, the NSCN-IM clarified on Z Plus security for its leaders. NSCN-IM said that it shows seriousness from the part of Indian government in dealing with those who have come to New Delhi on GoI’s invitation to carry forward the Naga political talk and that it didn’t ask for security.

“Anyone who tried to draw unparallel comparison is simply going superfluous,” said a press statement issued by the group’s Ministry of Information and Publicity on Monday.

The NSCN-IM recalled how ceasefire was signed in 1997 with a condition to hold political dialogue at the prime minister level in a third country and talks being held in several countries thereafter. It added that with the signing of the Amsterdam Joint Communique on July 11, 2002, “the GoI invited NSCN leaders to come to New Delhi giving full commitment to take care of their security concern”, following which its Chairman Isak Chishi Swu and General Secretary Th Muivah came to New Delhi in December that year.

“Prior to this, a Memorandum of Understanding (MoU) was signed on the 18th November, 2002, in Milan (Italy) to formalise their travel to New Delhi free from security risk. The MoU was in addition to a conscious decision of the GoI to discontinue the ban on the NSCN under the Unlawful Activities (Prevention) Act,” the press statement read.

“Once the NSCN Collective Leadership reached New Delhi they were provided Z plus category security arrangement with IB quarter as their official residence. They were extended this high profile security arrangement given the fact that they carry the Naga political mandate and they hold the Naga issue, and that the GoI has signed ceasefire with NSCN to pave the way for solution. Thus, everything was done on GoI’s initiative and not something asked by NSCN. This also reflects the seriousness of the GoI towards NSCN leadership and the issue they represent,” it added.