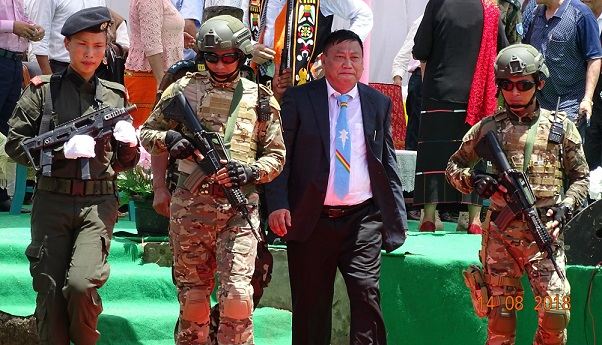 Dimapur, Dec. 15,2020: NSCN-IM vows to stick to ‘framework agreement’. It has made it clear to New Delhi that it would not accept any solution that is imposed upon the Naga people.

In a speech delivered by Q Tuccu, NSCN (IM) ‘yaruiwo’ (chairman), in the group’s ‘winter parliament session’ held on Tuesday. Copies of Tuccu’s speech were circulated to the media.

“The Naga people have been looking for their long-cherished solution, a solution that protects their sovereign right, their future, their history, their territory, their identity, their culture, their religion and their state. But they are strongly opposed to any kind of military solution or solution through coercion. The Naga people have rejected the past accords imposed on them. Definitely, they are for the solution that is arrived at through mutual agreement. Therefore, imposed solution or solution with an unmandated group of people who don’t represent the issue of the Nagas is not acceptable to the Naga people,” he said.

Says early or delayed solution ‘is not the point’ but issue-based solution is: NSCN-IM

The NSCN (IM) chairman maintained that early or delayed solution ‘is not the point’. “…but issue-based solution is the point that matters. The past accords could not bring solution because they were not issue-based solutions. The Naga people have reason to give thanks to the Indian prime ministers—PV Narasimha Rao, Inder Kumar Gujral, HD Deve Gowda, Atal Bihari Vajpayee, Lal Krishna Advani, (Deputy Prime Minister), Dr. Manmohan Singh and Narendra Modi and the Naga leaders, Isak Chishi Swu and Th Muivah, who have laid down the foundation for solution to the Indo-Naga political problem. This ‘framework agreement’ is the end result of their committed efforts. I believe solution is not far off if it is worked out in keeping with the spirit and letter of the officially agreed ‘framework agreement’,” he said.