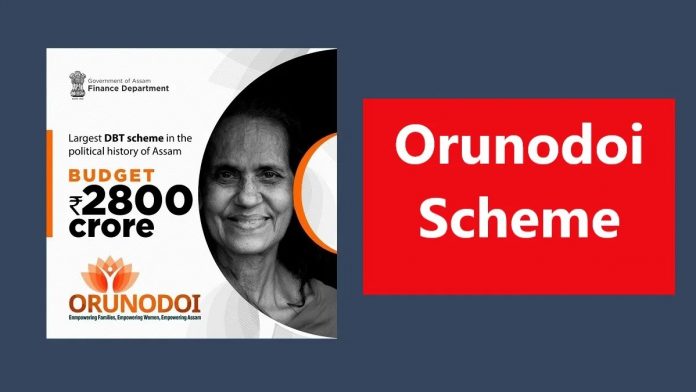 Guwahati: Assam’s most ambitious scheme of Orunodoi for the financially backward households of the state on Tuesday. Under the scheme, over 18 lakh economically backward families of the state to get a monthly stipend of Rs 830 each from now onwards.

The Orunodoi Scheme will be launched by Assam chief minister Sarbananda Sonowal on Tuesday during a function at the parade ground in Amingaon in the Kamrup district.

Assam finance minister Himanta Biswa Sarma on Monday said, “This is the biggest scheme ever taken by the state government. It will cover over 22 lakh poor families of the state. Since the model code of conduct is in force in four districts under Bodoland Territorial Council (BTC), beneficiaries in these districts will not receive the money for now. In the rest of the districts, we have identified 18.20 lakh beneficiaries in rest 29 districts.”

The scheme will cover the BTC districts of Kokrajhar, Chirang, Baksa and Udalguri from December.

The minister informed that all the beneficiaries under the scheme were women. “All the accounts identified for the scheme belong to women of the families. In that way it’s also one of the biggest women empowerment schemes of the state,” Sarma claimed.

To avoid loopholes and corruption in the scheme, the district administrations across the state were asked to conduct a survey of the households being selected for the scheme. A logo will be pasted on the walls of the houses of the beneficiaries of the scheme so that they could be easily marked.

“A call centre will be set up to address the grievances and complaints. If a villager believes that a family has been receiving the benefits of the scheme even though having a sound financial background, they can inform the authorities via a call too. District administration will then verify the complaints,” he added.

The finance minister said that the scheme aims to cover around 30 lakh households in the future and Rs 2000 crore has been earmarked for it.