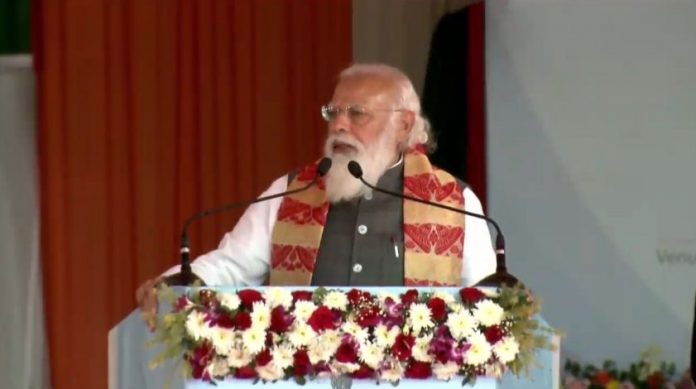 Asom Mela is a program for state highways and major districts road at Dhekiajuli in Sonitpur district of Assam.

PM Modi reached Dekhajuli on Sunday to address a rally. The meeting venue of Sonitpur’s Dhekiajuli is also significant since no Prime Minister has ever visited the historic place where, during the British Raj, 13 persons were martyred during the Quit India movement.

Addressing the rally, PM Modi said, “Assam gets the gift of Asom Mela and two medical colleges in Biswanath and Charaideo today. I am so glad today.”

Speaking about Dhekiajuli, he said, “Dhekiajuli is a historic land and a symbol of valour and pride. In 1942, Assam’s freedom fighter laid their lives to protect the honour of India’s pride. I bow down in their reverence; my heart is filled with Asamiya Pride.”

“I was delighted to see the beauty with which Dekhiajuli was decorated last evening by lighting Diyas, and I posted a Tweet also on the same. I salute you for that,” the minister added.

Glad to see immense enthusiasm in Assam. Happy to be getting yet another opportunity to be in the state tomorrow. We will continue working for Assam’s all-round development. pic.twitter.com/b1Ve5iOGwf

The two medical colleges and hospitals are being set up at Biswanath and Charaideo at a total estimated project cost of over Rs 1,100 crores. Each hospital will have a 500-bed capacity and 100 MBBS seat capacity.

It may be stated that this is Modi’s second-time visit in a little over two weeks to Assam and West Bengal. The PM will also address poll rallies in both states as the states scheduled to go to polls in April-May.