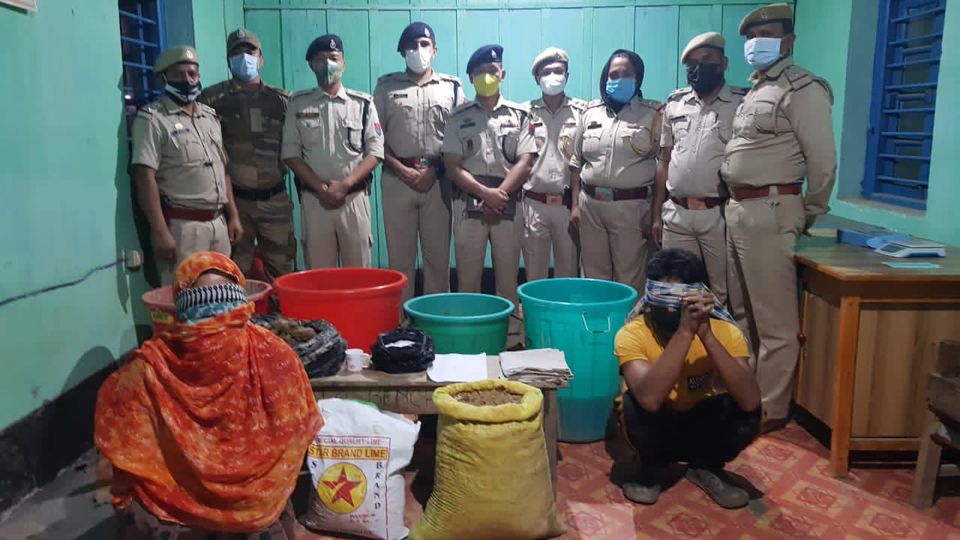 Imphal, Oct 24,2020: Manipur police on October 22 has busted an illegal brown sugar factory in Thoubal district of Manipur. Police arrested two persons with the recovery of around 41 kg of suspected brown sugar and other materials used in the manufacturing the illegal drugs.

A team of Thoubal district police busted the factory which was found running at a house at Lilong Haorou Hangamthambi under Lilong police station on Thursday evening, around 4.15pm.

According to superintendent of police of Thoubal district, S Ibomcha Singh, the factory was found at the house of one Md Tomba Phundreimayum, (32), of the said locality during a raid based on specific information. He also said that based on inputs, a team of police including women police personnel rushed to the house of Md Tomba and conducted a raid and recovered around 41 kg of suspected brown sugar packed in three different bags.

The police officer then said that on further search, 110 litres of morphinated liquid, one lime bag weighing 5.28 kg and suspected ammonium chloride weighing 1.274 kg used in processing the illegal drugs were recovered.
Police said two persons identified as Md Saukat Ali, (35) and Chinneilam, (28), who were allegedly involved in manufacturing the drugs, were arrested. However, three others escaped.

The three escaped taking advantage of the darkness. Efforts were on to nab them as their details have been established, the police officer said.

Manipur Chief Manipur Appreciates the effort of WAR ON DRUGS

2 thoughts on “Police busted an illegal Drug Factory in Manipur”