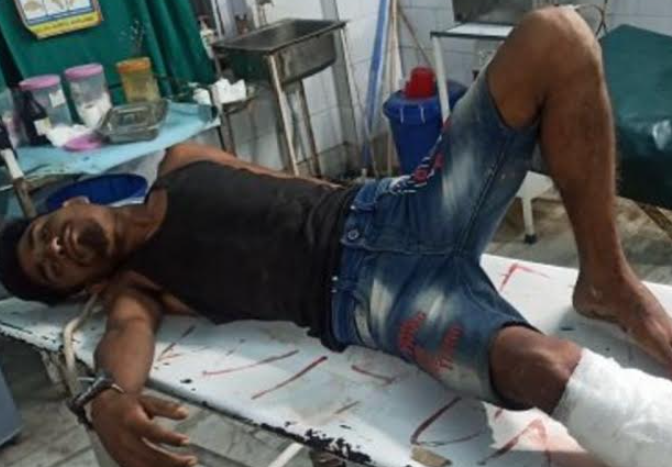 Kokrajhar: Kokrajhar gang rape accused Afruddin Islam was shot at and injured when he attempted to escape from police custody in Assam’s Kokrajhar district.

The Kokrajhar police had arrested the Afruddin Islam and two of his crime partners, Samejuddin Ali and Mustafa Ali, who had allegedly raped a 16 years old minor girl on Monday night. Kokrajhar police arrested the three after the victim’s father filed a complaint. Afruddin was being taken to a place where he had hidden the mobile handset with which they had filmed the rape incident, Additional Superintendent of Police Surjit Singh Panesar told the media.

The Kokrajhar police took accused Afruddin to a place where he had hidden the mobile handset with which they had filmed the rape incident.

As the police team neared the Dholmara Ranipur Tea garden, the rapist Afruddin suddenly turned and snatched the service pistol of a police officer and attempted to fire at the police team.
Another police officer immediately opened fire at the accused to control the situation, and the accused sustained bullet injuries in his right leg, ASP Panesar said.

The accused was admitted to the Kokrajhar Civil hospital for treatment.

The father of a 16-year old girl had filed an FIR at Kokrajhar police station alleging that three youths had raped his daughter while she was returning from a grocery shop on Monday night in Dholmara village.
The Kokrajhar police arrested all three rape accused. In police interrogation, the criminals confessed that they not only raped the minor but also filmed it in a mobile camera. A case was registered against them under various sections of the Indian Penal Code and the Protection of Children from Sexual Offences (POCSO) Act.