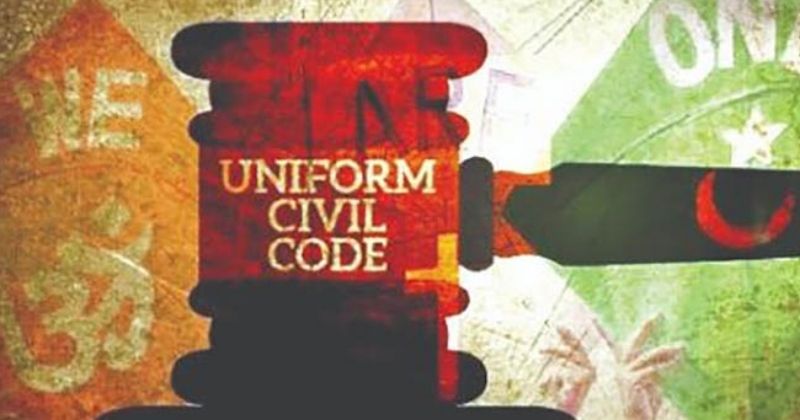 A division bench of the Supreme Court dismissed a Public Interest Litigation (PIL) petition on January 9 seeking to challenge the decision of Uttarakhand and Gujarat to constitute commissions to introduce and implement the Uniform Civil Code (UCC). The bench highlighted that Entry 5 in the concurrent list of the Seventh Schedule to the Constitution makes a mention of “marriage and divorce” and hence there could not be any objection to the formation of the committees by the state governments. Both the Union and states can make laws on subjects mentioned in the concurrent list.

The bench was presided over by Chief Justice of India D Y Chandrachud and Justice P S Narasimha. The petition was filed by Advocate Anoop Baranwal. “Extent of executive power of State Subject to the provisions of this Constitution, the executive power of a State shall extend to the matters with respect to which the Legislature of the State has the power to make laws”, the division bench opined.

The previous year on October 29, Home Minister Harsh Sanghavi had announced that the Gujarat Cabinet had decided to constitute a committee to assess all facets of enforcing UCC. The Constitution of a similar drafting committee also took place in the hill state of Uttarakhand last year. The committee was to prepare a report “to examine the relevant laws regulating personal civil matters of residents of the state and to prepare draft law/laws or suggest changes in existing laws on the subject that includes marriage, divorce, property rights, succession/inheritance, adoption, maintenance, custody and guardianship”. Chief Ministers of Himachal Pradesh and Assam, too had supported the UCC proposal.

In October 2022, the Centre told the Supreme Court that the matter would be placed before the 22nd Law Commission. In this matter, Advocate Ashwini Upadhyay had filed a petition seeking uniformity in laws governing matters of divorce, succession and inheritance and adoption and guardianship for all, irrespective of gender and religion. In its response, the centre said that the people of different religions and different denominations following separate property and matrimonial laws is an “affront to the National Unity”.

Directing towards the constitutional importance of the matter, the centre informed the Supreme Court that it has already referred the matter to the 22nd Law Commission that has already been instituted but waiting for the appointments of the chairman and other members. It requested the law commission to “undertake the examination of various issues relating to Uniform Civil Code and to make recommendations thereof.”

Additionally in December last year, the Kerala High Court stated in Anup Disalva & Anr. vs. Union of India, that the Union Government should seriously consider having a uniform marriage code in India to promote the common welfare and good of spouses in matrimonial disputes. “In a secular country, the legal paternalistic approach should be on the common good of the citizens rather than based on religion. The State’s concern must be to promote the welfare and good of its citizens, and religion has no place in identifying the common good,” said the court.

The aim of the Uniform Civil Code or UCC is to provide one law for all religious communities governing the issues of marriage, adoption, inheritance, and divorce, among others. It aims to abolish the varied personal laws that are regarded as one of the pillars of constitutional diversity. Presently, different religions have their own set of personal laws. These laws include the Hindu Marriage Act, Hindu Succession Act, Indian Christian Marriages Act, Indian Divorce Act, and Parsi Marriage and Divorce Act.

Article 44 of the Indian Constitution outlines that the state will take endeavour to enforce a UCC across territories of the country. However, it is important to note that Article 44 is part of the Directive Principles, which means it is not enforceable by a court of law. At the same time, fundamental rights are justiciable and can be enforced by the courts. The framing of directive principles is such that it mentions phrases like “in particular strive”; “shall in particular direct its policy”; “shall be the obligation of the state”, implying that it is a policy-level obligation, not a judicial matter for inference. However, while Article 43 notes, “state shall endeavour by suitable legislation”, Article 44 does not contain the suitable legislation portion, making it not absolutely compulsive on the legislature as such.