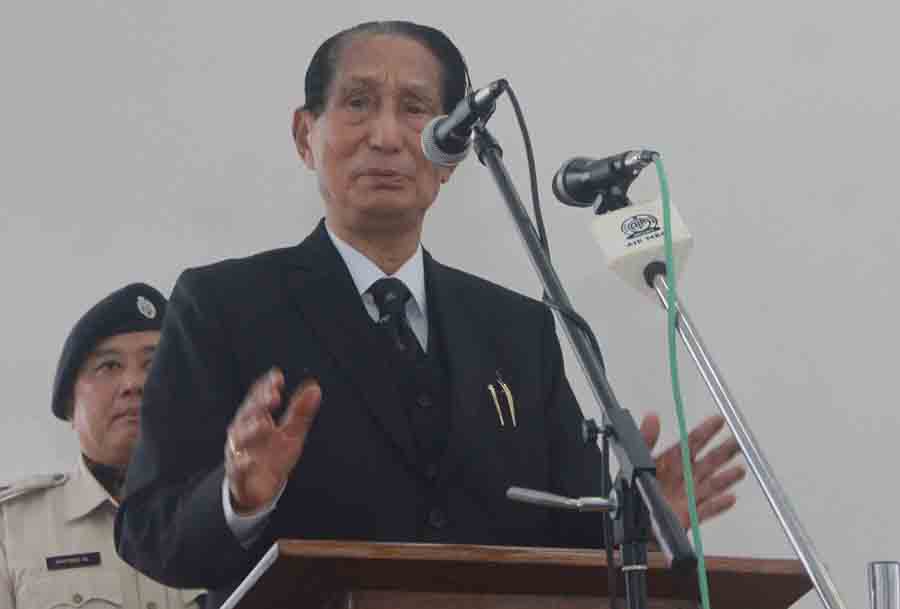 Dimapur, May 26,2022 : Soyim Students’ Union (SST) expressed displeasure at the allegations against Dr. SC Jamir regarding statements on the Naga political situation by the NSCN (IM).

SST stated that Jamir has steered people towards ‘prosperity and development while serving at the highest levels of government and such accusations against someone like him ‘appears irresponsible and idiotic’.

“The Indian constitution guarantees freedom of speech and expression to every citizen of India, and Dr. S C Jamir, as a genuine Indian citizen, has the right to express and share his views,” it read.

It also said that he was an eyewitness to a number of significant events in Naga history, and the only living individual who has seen the course of the Naga peace struggle. Therefore, “Dr. SC Jamir’s ideas and participation in the Naga peace discussions are vital, whether anyone likes it or not,” it stated.

Similarly, in a separate statement, Chumoükedima Ao Lanur Telongjem (CALT) stated that it was “aggrieved” at the recent accusation on Dr. SC Jamir by NSCN (IM).

“At this critical phase in Naga political history when the whole Naga people wait for the long awaited political solution; NSCN (IM) placing the entire blame of decades long Naga problem on Dr. SC Jamir is unwarranted and highly irresponsible.

“Nagas’ fight for a separate nation from India has always been based on the truth that we Nagas are different from India and that we have a right for self determination. This truth is the only reason why our struggle has endured for so long and the common Naga has supported the cause inspite of many hardships and sacrifices. However, today, Nagas have learnt to fear the truth and so try to flee away from it. A true leader may have many flaws but he will never waver from the truth,” read the statement.

CALT further said that Jamir only revealed what was said to him by the Prime Minister and Home Minister of India. It also condemned the attempt of NSCN (IM) leadership to “suppress the truth” by attacking Dr. S C Jamir.

“At this juncture, what we need is people speaking the truth and sharing their dreams and aspirations of a new brighter and better Nagaland,” it added.

The Ungma Senso Mungdang in a press statement also said that it was “disturbed by the recent accusations” against Dr. SC Jamir.

“As the last living Naga political icon who has observed the course of the Naga political struggle, it is only fitting that he speaks the truth, and whatever he says represents his personal opinion and views as a true bona fide citizen of Nagaland.

“The accusation made by the NSCN (IM) on Dr. S C Jamir, of ‘scheming with the Centre to destroy the very foundation of the Naga political identity that the Naga people have shed blood, sweat and tears over the decades,’ is a highly cruel statement and cannot be dismissed lightly,” read the statement.

Further, the Ungma Senso Mungdang stated that the NSCN (IM) must disclose the content of the Framework Agreement, while expressing support to Ao Senden’s stand that the ‘competencies’ being negotiated with the Government of India be made known to every one without further delay.