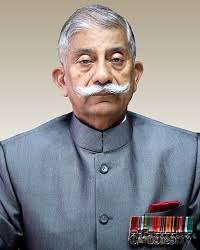 Itanagar: Arunachal Pradesh Governor Brig (retd) Dr B.D. Mishra has said that the national interest and security down to the last person in the remotest part of the State have always been the top priority of the government. Chairing a high-level security meeting with Chief Minister Pema Khandu and General Officer Commanding in Chief (GOC-in-C) of Eastern Command Lt General Anil Chauhan at Raj Bhawan here recently, the Governor advised for more interactions and meetings between defence and civil administration to further strengthen these priorities.

He stressed the need for removal of any bottlenecks in building better coordination, particularly in sharing of information on the matters of the defence of the international borders. The meeting was convened to review the defence and security apparatuses, coordination amongst the forces and the defence related infrastructure and communication necessities, an official communiqué informed.

The Governor also said that Indian Armed Forces are second to none in their fighting caliber, both in terms of men and machine. “With better relationships with the local populace, which is the ‘second line of defence’, we will surely defend our borders,” said Dr Mishra.

One thought on “Security down to the last person in the State have always been the top priority: Arunachal Pradesh Governor”