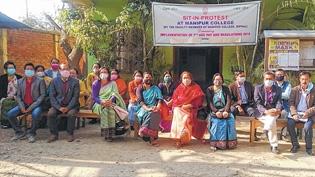 In a joint statement issued today, the student bodies said the mounting agitation of the teachers are due to the apathy of the Government towards them (college teachers) .

Teachers, who are the backbone of the education system and the society must not be deprived of the benefits of the 7th Pay when employees of all the other Government Departments are enjoying the perks of similar Pay Commission, said six student bodies today.

The UGC (University Grant Commission) has been formulating rules and regulations from time to time to meet the required standard to improve higher education in India.

There will be improvement in the higher education system of the State when these rules and regulations are implemented and followed.

If implementing a UGC policy takes more than 2 years, the higher education system of the State will only deteriorate and become a “joke”, they said.

While the college teachers are still yet to enjoy the 7th UGC Pay, employees of all the other Government Departments are enjoying a similar pay commission and its benefits.

This clearly shows that the Government is not only neglecting the teachers but the higher education sector.

The COVID-19 pandemic had shut all educational institutions for months since March last year.

Now, when colleges are starting to open, the series of agitations launched by the teachers are likely to affect classes and the career of the students.

Instead of intervening and acting on the demand of the teachers, the Government is simply observing the escalating situation.

As such, people are starting to question why only the college teachers are being targeted and denied the 7th Pay, they said.

If the Government takes higher education seriously and is committed to improving it, then it (Government) must prove its commitment with action by implementing the 7th UGC Pay and Regulations, 2018 .

The Government should also ensure that there is no other agitation/strike by teachers in future too, said the bodies.

It may be noted that Chief Minister N Biren’s recent plea to give 3-4 months time to implement the 7th UGC Pay and Regulations, 2018 did not go well with the agitating teachers.

FEGOCTA (Federation of Government College Teachers’ Associations), an apex body of teachers associations, had retaliated to the CM’s plea with a call to not stop agitation until the Government issues an order implementing the 7th UGC Pay.

It had said that the Government had repeatedly failed to keep its promises on many occasions since 2018 .

Meanwhile, the apex body has said that college teachers will be taking mass casual leave on February 12 and 13.In a statement it said that the Government using COVID-19 as an excuse for its failure to implement the 7th UGC Pay and Regulations, 2018, and portraying the teachers in the wrong light accusing them of having no concern for the students have caused more frustration and anger among the teaching community.

FEGOCTA is always open for dialogues for a peaceful academic atmosphere in the colleges, it said.