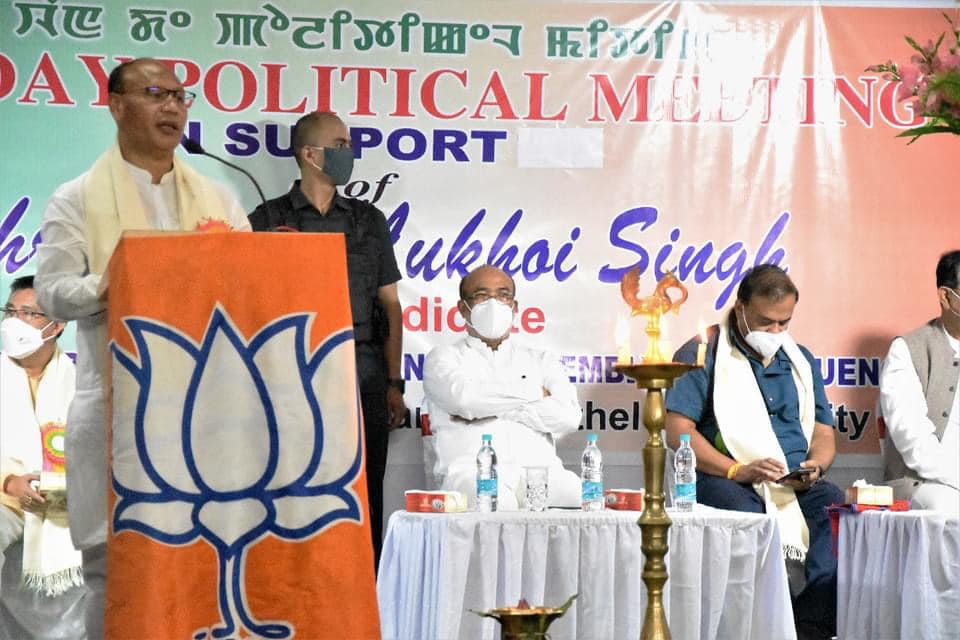 Stakes are high for the BJP candidate Oinam Lukhoi Singh who has been recently inducted as Cabinet Minister in the recent reshuffle.

Then BJP candidate in 2017, Salam Joy also known as giant killer as he defeated then Chief Minister Wahengbam Nipamacha in 2007 Assembly Elections. In this By-elections, Salam Joy is the Congress candidate.

Earlier Lukhoi switched sides after electing as Congress MLA in 2017 elections. He supported BJP led government soon after 2017 elections with few other MLAs from Congress. As case for disqualification as MLA was pending, he later resigned from MLA in the run up to the Trust motion on the floor of the house.

In this by-elections, a total of 28,561 voters will decide the fate of three candidates facing by-election from 22-Wangoi Assembly Constituency on November 7 . Polling will start at 7 am and end at 5 pm.

Out of the 41 Polling Stations, 5 are vulnerable and 36 are normal.

Altogether 205 polling personnel, five per polling station will perform their duty on poll day for smooth conduct of the election.

To ensure adherence to the Election Commission of India’s guidelines and SOPs, seven (7) Flying Squads, five Static Surveillance Teams, five Video Surveillance Teams (with 2 teams reserved for each) along with nine Sector Magistrates including three reserved are rendering their service.

Manish Kumar, IAS as General Observer, Aditya Bikram, IRS as Expenditure Observer in coordination with 12 micro observers are monitoring for free and fair conduct of the by-election as per guidelines of the ECI. Votes will be counted on November 10 from 8 am .