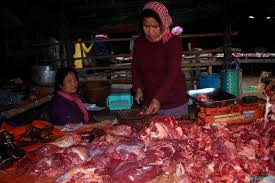 Senapati, December 03 2020: The office of the District Council Karong – Senapati Town today issued an order to prohibit import of pigs for rearing and consumption within the jurisdiction of Karong – Senapati town to prevent the spread of swine flu or African Swine Fever.

The order was issued with reports of pigs dying due to suspected Swine Flu in the last many days gaining ground, reports of pig deaths have also come in from Senapati district although the exact cause of the deaths could not be ascertained till the time of filing this report.

The notification is directed to all the meat butcher and general public in view of the prevalent deaths of pigs and swine flu epidemic in the district, adding that the epidemic can adversely affect the economy of the farmers as well as to the human health upon consumption of the infected meat, the order said.

It also warned of penalty to anyone who willfully defy the order for personal profit, effective from the date of notification.

Yesterday Dr Sani Pao, Specialist, Veterinary Department, Senapati stated that pig death cases caused by African Swine Flu cannot be ruled out in the district and added that the disease might have spread through imports from Assam via Dimapur.

To curb further spread of the epidemic in the district, the Veterinary Specialist drew the attention of the Town Committee to ban imports of pigs from neighbouring States and Myanmar.