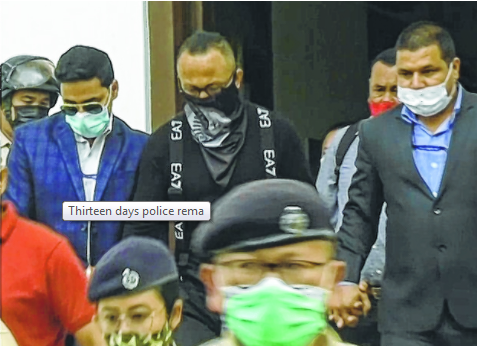 Today, Samarjit was produced before the Court of the Special Judge (NIA) Manipur, which remanded him to 13 days police custody.

The case pertains to declaring “Manipur Government in Exile” in London. On October 29, 2019, Samarjit and Yambem Biren had held a press meet in London wherein they announced the formation of the “Manipur State Council” a Government in exile and its “separation” from India.

The NIA had then registered a case against the two.

On March 29, he was produced before the Court of a Duty Magistrate and was remanded to NIA custody for 3-days. Narengbam Samarjit was detained by the Immigration authorities on March 25 at Delhi IGI Airport on arrival from London by an Air India flight.

The NIA (National Investigation Agency) had then arrested him and later brought him to Imphal on March 29 after getting a transit remand for 6 days from a Delhi Court.

They were produced before the Duty Magistrate yesterday and remanded to 7 days police custody till April 5 .

NIA investigation has established that that the Salai Group of companies was indulging in Ponzi scheme/money circulation scheme and due to unsustainability of the scheme, Narengbam Samarjit had fled to London with the money of the depositors and announced the “independence of Manipur” .

It also claimed that the SMART Society, through its Micro Finance Division collected money from people at the rate of 3 percent interest without any legal sanctity and three accused persons–vice-chairmen of Salai Group of Companies–Elangbam Brojendro, Narengbam Biswajit Singh and Akoijam Deepa Anand had utilised the “illegally” collected money of SMART Society in other Salai companies and thus laundered the money in conspiracy with Samarjit.