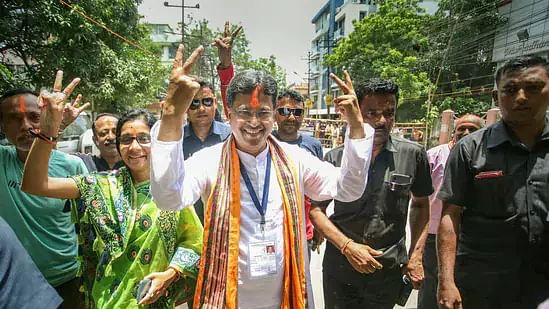 Agartala: The counting of votes was completed in Tripura by-polls in four Assembly constituencies on Sunday (June 26). BJP won three out of four seats with Chief Minister Dr Manik Saha emerging victorious in his first-ever direct electoral battle from the Town Bardowali constituency.

In the Agartala constituency, Sudip Roy Barman of the Congress won. The BJP’s Swapna Das won in Surma and BJP’s Malina Debnath won from the Jubarajnagar constituency,

Voting for the Tripura by-polls in four Assembly constituencies took place on Thursday, June 23. Out of 1,89,032 people, over 78.58 per cent of them cast their votes amid incidents of violence.

Tripura by-polls results were announced today (June 26) for the by-elections to Agartala, Town Bordowali, Surma, and Jubarajnagar Assembly constituencies. BJP won 3 out of the 4 seats.

Voting was held on Thursday in the Agartala and Town Bardowali assembly constituencies, which are in the West Tripura district, the Surma seat in the Dhalai district, and the Jubarajnagar constituency in North Tripura.

Manik Saha, who replaced his predecessor Biplab Kumar Deb last month, said his victory was expected but claimed the BJP’s winning margin was below their expectations. He alleged that the opposition CPI(M) made a secret nexus with Congress and transferred its votes to them.

“The winning margin was less than expected because there was some understanding between the Congress and CPI(M). It’s clear the latter transferred their votes to the CPI(M). Votes were given for development. I’ll work hard. A tree is known for its fruits. I’ll try my best,” said Saha.

Manik Saha also said the alleged nexus between opposition parties was at play in all the seats which went to bypolls.

However, the Congress party alleged Manik Saha’s victory was not the true mandate of the people and came through false voting and poll violence. “The BJP is making these allegations since they lost. This is a gossip they would like to spew now to cover their failure. Our main target is to defeat communal forces. So like-minded parties in coming days might come together to ensure the defeat of communal forces,” said Congress heavyweight candidate and former minister Sudip Roy Barman who defeated BJP candidate Dr Ashok Sinha